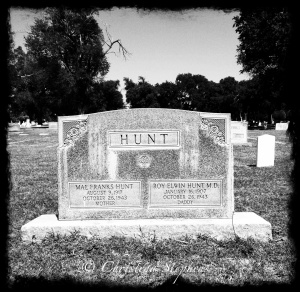 In October 1943 when Dr. Roy and Mae Hunt are found brutally murdered and disturbingly tied in their bed in a West Texas town, two suspects emerged in the slayings, but solving their murders came down to a bungled investigation and weak forensics, even the fatal bullet that took Roy’s life disappeared.  Adding to the mystery was the attempted murder of Dr. Hunt over a year earlier.  The only eyewitness who saw the murderer, Jo Ann Hunt, their five-year-old daughter, tells her harrowing account for the first time shedding new light on what transpired in the Hunt home when her parents were murdered.  “Fatal Bullets and the Search for Justice” details the murders and investigation through trial transcripts and appeal records and newspaper accounts.  Through extensive research, this story provides insights into how investigators mishandled this murder investigation on various levels.

I’ve spent six years with these unimaginable murders, telling the story – now to find a publisher so it can be shared.

12 replies to The Hunt Story…