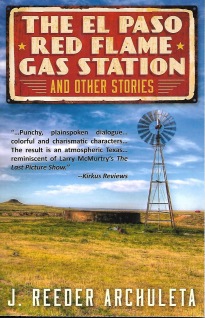 These short stories are about coming of age in rural far West Texas.  The stories are about the people who have come to stay in a remote part of Texas with a climate that can be harsh and unpredictable and that is demanding and unforgiving.  The stories are told through the eyes of Josh, a young boy, who finds himself alone in a small farm and ranch community and who realizes that he will have to make his own way in this place.  Along the way he meets a group of characters with different takes on life.  Some try to help shield him from the chaos of the world, some try to add more chaos. But all of them, in their own distinct way, through jobs, advice, or actions, play a part in his life.

“The cottonwood trees that stood between the high school building and the football field still held onto most of their leaves but they had begun to take on that dry brittle appearance which along with the dormant Bermuda grass and a chilled breeze out of the north signaled the start of winter in west Texas.”

Reeder Archuleta’s book The El Paso Red Flame Gas Station and Other Stories is a small book of 122 pages and is one of the most readable books I’ve encountered in a while. Archuleta transports readers ever so fleetingly in this small book into the coming of age character, Josh.

Each little story in this well-written and engaging book reveals ever so slightly the life of Josh in a small West Texas town not far from El Paso. From Josh being taken away from his father as a young boy, to being abandoned by his mother just what seems mere months later – Josh lives his life the best way he can given his circumstances.

Archuleta blends the story well with other characters in Josh’s life that you get a good succinct background on each one without much verboseness. Especially on Roble, the girl that fell in love with Josh.

You can clearly tell Archuleta grew up in West Texas from the short, vivid descriptions of the often-harsh landscape that many of us currently call home. The above selection from the book is a perfect example of how I can tell winter is near.

If you love short stories, especially ones based in Texas that can quickly transport you from your world – then Archuleta’s book should be on your reading list.

The author was raised in far West Texas and five generations of his family are in their final resting place there.  His
great-grandfather is buried in Concordia Cemetery in El Paso within spitting distance of the grave of John Wesley Hardin.
║Website ║       ║ Amazon Author Page ║
————————————-
GIVEAWAY!  GIVEAWAY!  GIVEAWAY!
READ & SIP! TWO WINNERS EACH WIN A SIGNED COPY OF
THE EL PASO RED FLAME GAS STATION +
A $5 STARBUCKS GIFT CARD
APRIL 17-26, 2018
(US ONLY)