Stunning beauty and amateur cellist Marie Donovan finds herself in deep trouble after her pro-quarterback husband dives off a Dallas high rise—many say in shame after his shady investments go sour. Just months later, the grieving Marie faces capital murder charges for the death of a lecherous opera maestro. When hard evidence points squarely at her, only her best friend and defense lawyer believe her.
Marie is no stranger to struggle. During her six years as an NFL Football wife, she fends off groupies eager to take her man, all the while feeling lost in her husband’s macho culture. Studying the cello becomes Marie’s solace until her hard-drinking husband retires after an injury. Returning to Dallas, he plays with high society’s money in an investment scheme until winning at all costs leaves Marie and her twin sons on the hook for millions.
Scorned by society friends, charged with murder, Marie pins her hopes on hunky defense lawyer Ryan Ingles, one of Cole’s college football pals. After Ryan’s legal team discovers some of the maestro’s dark secrets, Marie and Ryan’s investigative troupe travel to exotic islands in search of clues Cole left behind. As the tropics weave a romantic spell, a corrupt offshore banker dashes Marie’s hopes. She wonders if she’ll ever be free of blame…and able to claim her own place in this world.

PRAISE FOR OUT AND IN

“Out and In is the perfect mystery-thriller for the beach, a long flight, or to savor before bed…an exciting but heartfelt story about a beautiful woman who struggles to prove her innocence … As for the ending, I am still stunned.” — Lara Reznik, Amazon best-selling author of The Girl from Long Guyland and Bagels and Salsa.
“Could not put it down, once I started reading. Definitely a must-read. Look forward to reading more books from Pat Dunlap Evans. ” — five-star Amazon review by reader “Mimi”
“Awesome…flowed nicely … definitely kept you on your toes to who actually committed the murder. The lead character was a perfect blend of hard and soft. A great read.” — five-star Amazon review by reader “Tiffany”
CLICK TO PURCHASE!
GET THE eBOOK FREE SEPTEMBER 22-24, 2018!

Making a Boring Spectacle of Myself

I have scheduled a book promo for my mystery-thriller Out and In with Lone Star Literary Life, an e-newsletter for Texas writers and Texas readers. They want to use my “book trailer,” which is a short video like a preview for a Hollywood movie. I don’t have the cash to spend on such projects, so I thought I would make a simple “about the novel video,” using my trusty iMac and the Apple software iMovie.
All I can say is this stuff ain’t easy. Not only did I have to learn how to use the tricky iMovie software but also, I had to make myself and house look presentable. And the background music inspirational.

Remove All Traces of Dogs

First, I framed my computer camera so it would not record the dog toys, dog blanket on the sofa, and especially the dogs that populate my upstairs office.
Next, I donned a bright red top and applied as much makeup as my face could hold. I also put a lamp behind my computer for lighting. To my horror, my video camera revealed that I’m definitely not young. Or even close. Even the most makeup I could smear on my face cannot change that. So, I reminded myself that one of my favorite authors Joan Didion had a rather unflattering photo of herself in the back of The Year of Magical Thinking. She looked exhausted and devastated — and who would have blamed her?

Next, I wrote a one-page script describing Out and In and did my best to memorize it. After about 10 takes, I realized I couldn’t memorize every word, so I taped the script to my iMac screen and glanced at it while I videoed myself for another 10 takes. Because my eyes kept glancing between the script and the green light on my computer camera, I looked like “Tricky Dicky,” which is what some used to call Richard Nixon.

Eventually, I decided to wing it without a script. After about 10 more takes — eyeglasses on, eyeglasses off — I settled on a version that was maybe sort of okay. But after I launched it on YouTube, I noticed that I had a bra strap showing! For gosh sakes, how have I missed that? In addition, I had used a clip from Rachmaninov’s Symphony Number 2, downloaded from iTunes, but YouTube warned me that was a copyright violation.

Oh No, Do the Whole Thing Over.

I tucked in the bra strap and started over, trying to speak more quickly. I have a new admiration for TV personalities. Although I spoke as fast as I could, it seems I pause one whole second between every word.
Figuring out background music took a lot of time because I had to learn how to make the clip play loudly at first, softer while I spoke, then full volume again at the end. This took numerous searches through iMovie Help.
For royalty-free music, I Googled a website where musicians upload works for use solely with attribution. Because my heroine is a cellist, I selected a cello piece called “Full of Stars,” composed by Philipp Weigl, of Munich, Germany. Thank you, Philipp!

My resulting video is not what I would call exciting. It’s very basic and perhaps a bore, except to readers who actually enjoy hearing from an author about her work. I’m not promoting the video heavily because I’m a bit embarrassed by it. But if you would like to hear my overview of my mystery-thriller Out and In, please check out this link on YouTube.

Again, many thanks for following me, and especially for reading and rating my work! Those stars mean everything to authors, and we appreciate your taking the time to post them. 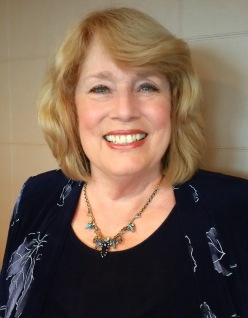 Pat Dunlap Evans was born in Michigan but “got to Texas as soon as I could,” she says. Her family lived in San Antonio and later Dallas, where she attended South Oak Cliff High School and Southern Methodist University. Pat eventually completed her bachelor’s and master’s degrees in English at the University of Missouri, Kansas City, with emphasis on creative writing. She also taught freshman writing courses as a part-time lecturer.

After a divorce, Pat stressed her way as a single mom through twenty-five years of high-stress advertising and marketing roles before retiring to write fiction and screenplays. She lives in the Lake Travis area with her second husband Dr. Bill Evans and enjoys travel, golf, volunteer work, sailing, and the chaos of the couple’s combined five adult children, five grandchildren, and two cockalier dogs.

Pat has published two novels, To Leave a Memory and Out and In, with a third novel Those Who Try due out soon.