Investigative Services Branch ranger Ainsley Beaumont wishes the visit to her hometown of Natchez, Mississippi, was under better circumstances. When she arrived to investigate the murder of a pregnant teenager, she never imagined that she would become the killer’s next target–or that she’d have to work alongside an old flame.

After he almost killed a child, former FBI sniper Lincoln Steele couldn’t bring himself to fire a gun, which had deadly consequences for his best friend. Crushed beneath a load of guilt, Linc is working at Melrose Estate as an interpretive ranger. But as danger closes in on Ainsley during her murder investigation, Linc will have to find the courage to protect her.

The only question is, will it be too little, too late?

Much to Learn, Much to Love in Writing

I love being an author because it allows me to have all those careers I wanted as a child—and even after I grew up. One of those careers was to be a park ranger. Another was to be a detective. With Crosshairs, I got to be both!

When I first started the Natchez Trace Park Rangers series, I thought I knew all about rangers. It was only after I interviewed the superintendent over the Natchez Trace that I discovered I had a lot to learn—like the National Park Service has an elite group of rangers in the Investigative Services Branch—think the FBI of the NPS. That was my heroine, Ainsley Beaumont.

For you see, in Crosshairs, my hero Lincoln Steele is a former FBI sniper who has lost his edge after almost killing a ten-year-old boy. It cost his best friend his leg and ultimately his life. And now Linc can’t bear the thought of carrying a gun, much less shooting one. It’s why he left the FBI and became an interpretive ranger.

I realized Ainsley Beaumont might perceive Linc as weak because he wouldn’t carry a gun. After all, she is an ISB Special Agent, facing danger every day. I would just have to show her his true characters and that heroes come in all shapes and personalities.

What is a hero? Here’s Merriam-Webster definition:

To me, a hero is one who has a willingness to selflessly serve others, one who will weigh the consequences of an action—like running into a burning building to save someone—and still do it. And that was Linc.

Not that he was perfect—Ainsley Beaumont, my heroine and  could attest to that, but then neither was she. Writing Ainsley’s character as she learned that unforgiveness only hurt her gave me the opportunity to look at those who hurt me in the past, and see their actions in a different light. How sometimes what we perceive as a negative is only someone looking out for us.

Because her father had never told her she had a good voice, Ainsley believed he didn’t think she was good enough to turn professional. Same thing with Linc, and she took the advice they gave her about her singing career as a negative when they were worried that the music industry might destroy her. And it very nearly did.

Ainsley eventually comes to see that her father had never come to grips with the death of his wife, and that he did the best he could at the time.

Another thing I love about writing this book is researching Natchez. I’d never been to this beautiful town before with its antebellum homes. I’ve included a photo of a house that could double for Cora and Rose’s houses. (Because it was Spring, it was hard to get a clear shot of the house.) There is a lot of history in these homes, and many of them have secret passageways like Cora’s house.  I’ve also included a photo of Auburn with its spiral staircase that is totally unsupported, a feat unmatched even today, and a photo of D’Evereaux Hall—it’s no wonder I fell in love with Natchez!

Patricia Bradley is the author of Standoff and Obsession,
as well as the Memphis Cold Case novels and Logan Point series. Bradley won an Inspirational Reader’s Choice Award in Romantic Suspense, a Daphne du Maurier Award, and a Touched by Love Award; she was a Carol Award finalist; and three of her books were included in anthologies that debuted on the USA Today bestseller list. She is cofounder of Aiming for Healthy Families, Inc., and she is a member of American Christian Fiction Writers and Romance Writers of America. Bradley makes her home in Mississippi. 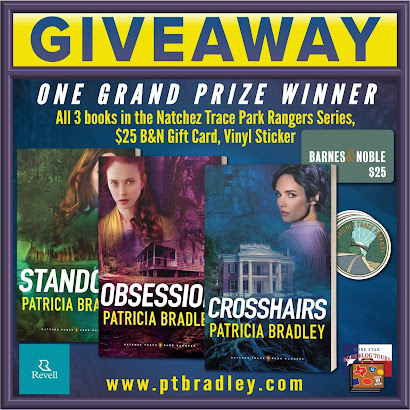