An excerpt from Chapter 1 – Dark Shadows: 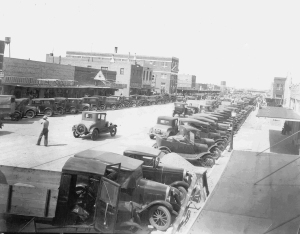 Historically, there are days when dark shadows descend down on a town.  Littlefield, Texas was not exempted from having its own dark days.  The small West Texas town was struck with grief and horror of a darkness that came with three murders.

On October 26, 1943, Dr. Roy and Mae Hunt were brutally bound and murdered in their bed.  However, it was not the town’s first time into this type of darkness.  Seven years earlier the county sheriff, F.A. Loyd was gunned down.  While this book is not about the murder of the sheriff, it is about the darkness that settled over the town that resulted from the Hunt murders and his murder.

Both of these cases used early forensics in trying the alleged murderers.  The fatal bullets in these cases are forensically and judicially intertwined due to the investigators who became central in both cases in this small community.

Evidence always bears the personality and professional mark of the person who gathered it during an investigation.  The evidence in the murders of the sheriff, especially the Hunts bears the marks of the county sheriff, deputies, Texas Rangers and the state attorneys.

2 replies to The Hunt Story – Chapter One Insight…