Characters in the eleven stories in Nowhere Near act in ways that some might call “divinest madness.” Some of them have been pushed near their limits by years of stress. Others mourn and grieve and discover feelings they can’t admit aloud. A sense of duty drives another to believe in aliens, at least for a while. Some of their behavior is simply laughable, other flirts with death, and the rest ranges from dangerous to near heroic. These characters vary widely, yet all have in common that they live in or come from West Texas, where spaces are wider and tolerance for strangeness seems just a bit greater. Whether readers agree these characters are nowhere near crazy, they may admit they all are doing what humans do—what makes sense to them at the time.

Praise for Nowhere Near:

“Teddy Jones writes about plainspoken people whose lives are entangled and wrought and marked by routine—routines they cherish, routines they wish to escape—and who glimpse, now and again, a sense of something beyond their ability to reason. The stories in Nowhere Near are deep, honest, and unsentimental, and they pierce you to the bone.—Robert Boswell, author of Tumbledown & The Heyday of the Insensitive Bastards

“There’s so much goodness in these stories, the kind of goodness that grows out of characters who endure hard lessons leading them to revelations and deep understanding. You’ll find real people here, with real heartaches and mistakes and regrets. With language as true as music, a steady and perceptive eye, and at times a blazing humor, Teddy Jones creates fully imagined and realized worlds. Subtly, she makes strangeness ordinary and the ordinary strange. You will recognize the people in this book the way you recognize your own neighbors and friends and co-workers and family: full of annoying quirks and surprises and, finally, a saving grace.”—Eleanor Morse, author of White Dog Fell From the Sky

“Teddy Jones is the real deal. With her characteristic wit and goodhearted characters, Jones draws a bead on West Texas life as it’s currently lived. Her precise ear for the rhythms of life and language guides the reader confidently from dry land farming to the double life of dreams and secrets. These stories stuck with me and left me wanting more.” –Summer Wood, author of Raising Wrecker

Nowhere Near – A Review

Nowhere Near by Teddy Jones is an eclectic collection of 11 stand-alone stories. Each story is uniquely set on its own and deals with different themes with most of the stories dealing with death and loss, as well as discovery. Which sadly is apart of all our lives – the loss and death that is.

The stories are all set in Texas. As I was reading the stories I can see the roads the characters traveled, as well as the towns referenced from Odessa to Hereford to Wichita Falls to Muleshoe.

“Clean Getaway” offers a glimpse of what a small-town funeral director does to help honor last wishes. “First Things First” gives insight as to why people leave West Texas and how the Internet can really screw with your mind – literally. While most of the stories deal with the loss of some kind there are other stories for readers to enjoy.

Out of the 11 stories, The Woman With a Miniature Donkey was my favorite of the entire collection. While this story deals with the loss of a sister and discovering her secrets at the end of the story you find how the surviving sister possibly found herself through her sister’s passing with the help of a donkey named Cisco.

You can detect moments of your own life in some of these stories, like with the “Scent of Rosewater”, because one of my grandmother’s always used a rose-scented lotion that’s now long gone from the shelves.

Jones craftily wrote a UFO story that leaves you wondering why would aliens be interested in cows at all. Great writing carries each fast-paced story. Honestly, there are some stories you wish did not end.

Teddy Jones has been a nurse, nurse practitioner, university professor, college dean, and occasional farmhand. She grew up in a small north Texas town, Iowa Park, and gained college degrees in nursing at Incarnate Word and University of Texas, a Ph.D. in Education at University of Texas at Austin, and an MFA in Creative Writing from Spalding University. She held nursing, teaching, and administrative positions in Austin, Denver, and Lubbock and as a family nurse practitioner in Texas and New Mexico. Writing fiction was her “when I know enough and have the time” dream all those years. Now she and her husband live near Friona, in the Texas Panhandle, where her husband farms and she writes full time.

One Grand Prize: Signed copies of both Nowhere Near and Jackson’s Pond, Texas, set of 10 hollyhock notecards, and a 11×15 print of the cover art from Jackson’s Pond.

1st Runner-Up: Signed copy of Nowhere Near + choice of notecards or print

Next Three Winners: choice of notecards or print 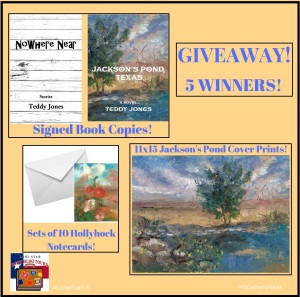 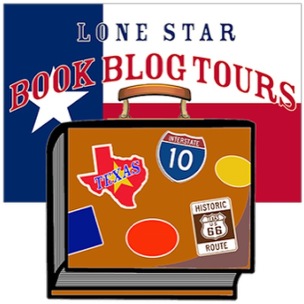