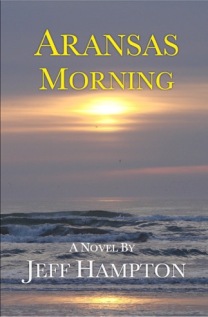 When Sam Barnes’ high-flying life in Dallas falls apart, he flees to the coastal town of Port Aransas, Texas and fades into the life of a reclusive beach bum. But things start to change when he meets Dave, a young widower working through his own loss; Shelly, owner of the Dream Bean coffee shop; Bo, a crusty old shrimper; and Allie, Bo’s free-spirited daughter. Together they are tested and forced to confront their own issues. In doing so they discover family and community.
PRAISE FOR ARANSAS MORNING:
“Engrossing characters that keep doing unexpected things. Strong sense of place along the Texas coast and deep knowledge of the culture. This book is about relationships and how ‘family’ and ‘community’ might be redefined.”
“In this heartwarming book, Jeff Hampton took me to a place I’ve never been and captured me with his delightful characters, seaside landscape, and deft use of words to portray a small group of people who came together to create and run the Dream Bean cafe. Great summer reading.”
“I loved the characters, with their flaws and their graces. It is an honest and heart-warming story of redemption coming through community. I’m really glad I read it.”
“Really nice character development, articulating in a very comfortable and readable style the messy, complex, joyous and hopeful ways we build, break and nurture ‘community.’”
“Very quickly in the story, the characters became like friends. The book is engaging and held my interest.”

Click to read part one on Storeybook Reviews Blog

Allie now found herself in the odd position of having to speak for someone else, but as she thought about that she smiled because she knew what her mother would want her to say.

“She had a good life, but it wasn’t because you left her. She knows – I know – that you meant well, but she didn’t need anything different from you or from anyone else to make her life good. She had a good life because that’s who she was.”

Bo nodded. “She was good. There’s no doubting that. And that’s . . .” Bo hung his head for a moment, rubbing his dirty hands together as if that would change things.

“And that’s what?” Allie asked.

“That’s why I left. I thought as sweet and kind as she was, she could do better with someone else.”

There was silence for a moment. Bo straightened up and looked around, noticing that the pier was unusually quiet. “What day is it?”

“Oh, that explains why there’s nobody around. Your mother always went to church on Sundays. I’d sleep in, but she’d get up and go. Said it helped everything make sense to her. I never really understood that.”

“She never gave me that choice,” Allie said. “She’d take me kicking and screaming sometimes, but she said I was too young to decide for myself. When I got older, she let me do what I wanted.”

“I went with her. She was the light of my life.” Allie tossed her hair back, letting the sun bathe her face.

“Where was she going when the storm hit?” Bo asked.

“She was taking groceries to a lady from the church who couldn’t get out. I tried to talk her out of it but she wouldn’t listen. She said we needed ice cream anyway.”

“She was strong willed . . . and she always had to have her ice cream. I’m glad that didn’t change.”

“Yes, but it likely killed her.” Allie stood up and brushed off her pants.

“Maybe so, but she was just being who she was, and she wasn’t afraid of nothing.”

Bo stood up too and fumbled for his pockets. “Everything.”

“That doesn’t tell me anything.”

“Providing for her, being steady . . . and that, what you just called me . . . I just didn’t think I could be who she wanted me to be, or what you both would need. I mean . . . . look at me.” He stretched his arms out as if to enlarge his deficiencies.

“Honestly, did she ever ask you to be someone or something other than who you were?”

“Well no, but . . . .” He stopped. There was no explaining what even he didn’t understand.

“I guess we work on getting you home.”

At the Dream Bean, Shelly, Sam and Dave were sitting at a table, making small talk about what might be happening just a short distance away when the door opened and Bo and Allie walked in. They all stood as if on cue and waited for some indication of what to do next.

“We need to get this girl home,” Bo said.

“I don’t want to go home, not just yet anyway.” Allie crossed her arms. She’d made her decision on the short walk over. The others all looked at each other.

“I’ve just got the trailer,” Sam piped in.

They all looked at Shelly, but Allie interjected. “I’m not asking for anything from any of you.” Everyone relaxed their posture a little. “I came here because I wanted to and I can get a motel room.”

There was a brief silence, and then Shelly spoke. “Nonsense. I have a spare room. You can have it as long as you like.”

“Well, then, that seems to be settled,” said Dave. 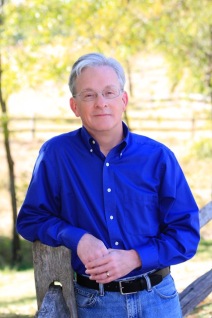 During a 35-year career in journalism and communications, Jeff Hampton has covered and written about topics ranging from business and finance to history and faith. His bylines have appeared in publications ranging from The Dallas Morning News to The New York Times.
He attended Baylor University where he majored in journalism and was editor of the Baylor Lariat campus newspaper. He began his professional career at the Waco Tribune-Herald and has written for newspapers, magazines, businesses, non-profit organizations and government agencies.
Hampton has based his life and career in Texas where his interest in observing the people around him has led him to write essays, short stories, and novels that explore relationships and communities in their many forms.
Aransas Morning is his fifth book, following Grandpa Jack, When the Light Returned to Main Street, Jonah Prophet and The Snowman Uprising on Hickory Lane.
Watch for Aransas Evening, a sequel to Aransas Morning, in 2018.
║ Website ║ Facebook ║ Twitter ║
║ Instagram║ Goodreads ║
GIVEAWAY!  GIVEAWAY!  GIVEAWAY!
FIVE SIGNED COPIES!
JANUARY 23-FEBRUARY 1, 2018
(U.S. Only) 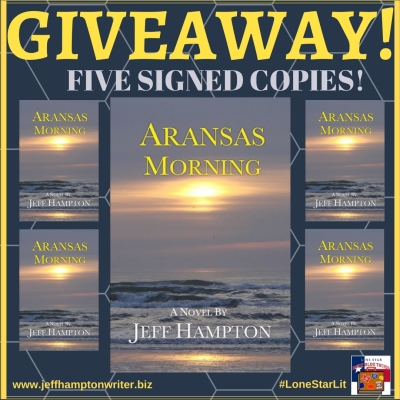 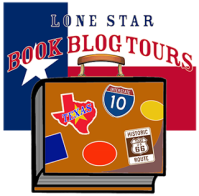