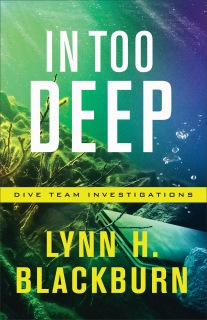 When the dive team is called in to recover a body from a submerged car, they aren’t prepared to find an encrypted laptop—or an unsettling connection between investigator Adam Campbell and the dead accountant.
Adam turns to his friend Dr. Sabrina Fleming—a professor at the local university with unparalleled computer security and forensics skills—to recover the files from the laptop. But the deeper they dig, the deadlier the investigation becomes. When evidence uncovers a human trafficking ring and implicates members of Adam’s own family, he and Sabrina will have to risk everything to solve the case.
The truth could set hundreds free—but someone is willing to do whatever it takes to silence anyone who threatens to reveal their secrets. Award-winning author Lynn H. Blackburn invites readers back to Carrington, North Carolina, where everything is not as it seems, and sinister elements lurk behind the idyllic façade.

PRAISE FOR BENEATH THE SURFACE, BOOK ONE IN THE DIVE TEAM INVESTIGATIONS SERIES:

“Fans of Dani Pettrey’s “Alaskan Courage” thrillers will enjoy this nail-biter of a series opener, which will also be appreciated by romantic and psychological suspense fans.” —Library Journal
“Just when you think you can relax, Blackburn brings you back to the edge of your seat in this riveting, high-tension suspense story.”
—Patricia Bradley, author of Justice Delayed
“Blackburn’s Beneath the Surface is completely engaging from the very first page. Dive Team Investigations is bound to be a new favorite series for readers everywhere.” —Christian Market

CHAPTER ONE, PART ONE OF

The shrill ping of his cell phone earned white-­collar crimes investigator Adam Campbell a vicious glare from his aunt Margaret. His cousins all dropped their gazes to their plates, several of them failing to suppress snickers, as Adam stood. He glanced around the table at the assembled family members before focusing on the matriarch of the family. “Excuse me, Grandmother. Everyone. I’m on call.”

Conversation resumed as Adam made his way around the perimeter of the oval dining room. He refused to look down or run like a frightened schoolboy. He maintained a measured pace and made eye contact with anyone who bothered to look in his direction. He had nothing to be ashamed of.

His parents were in Italy until Thursday, or his mother would have given him an encouraging smile. Oh well.

No one glared at his brother when he was on call. Grandmother never batted an eye when Alexander needed to miss Sunday lunch because he was in surgery. But heaven forbid Adam miss the monthly meal. Keeping the citizens of Carrington, North Carolina, safe

was a perfectly good job as far as Grandmother was concerned. But not for a Campbell.

Adam didn’t bother trying to hide his smile as he left the room. His grandfather was a rock. They met for breakfast at least once a week at the Pancake Hut, and Adam regaled him with stories from the sheriff’s office.

The restaurant was a favorite with the law enforcement and medical communities in Carrington, and Adam’s standing breakfast date with his grandfather had gotten a lot of attention when he first joined the force.

The Pancake Hut wasn’t the kind of place the Campbell family usually frequented.

As Charles Campbell made it a point to get to know Adam’s co-­workers by name, Adam’s fellow deputies soon realized he might be worth several billion dollars, but he was no snob.

It was a poorly kept secret that Charles Campbell was in the habit of picking up the tab for every law enforcement officer in the Pancake Hut whenever he was there—­whether or not he was with Adam.

Before long, deputies and investigators started coming by Adam’s desk and saying, “Yo, Campbell, I’ve got one for your grandfather. He’ll get a kick out of this.” Or they’d stop by their booth and share something that had happened while they were on patrol.

Grandfather ate it up.

Over the last few years, Grandfather had managed to fund several scholarships for law enforcement officers, and he’d fallen completely under the spell of homicide investigator Anissa Bell, captain of the Carrington County Sheriff’s Office dive team. All Anissa had to do was hint that she’d been eyeing some new piece of equipment for the team and Grandfather made it happen.

Grandmother wasn’t exactly aware of that arrangement either.

Adam paused in the hallway and looked again at the text that had saved him from another hour of family politics.

Uh-­oh. He walked briskly as he maneuvered his way through the library and music room and then hit the marble floor of the large foyer.

“Everything okay, Mr. Adam?” The concerned words from the family’s longtime butler slowed his steps.

“Not really, Marcel. A car ran off the highway and over the embankment at the double bridges. Probably last night. A boater found the car this morning.”

The double bridges spanned Lake Porter and connected the tourist side of the lake to the city of Carrington. The car would have gone close to a hundred yards over bumpy terrain next to the bridge approach before plunging into the water.

It had happened before.

“Was someone in the car?” Marcel asked the question in a low voice.

When Adam nodded in the affirmative, Marcel shook his head in dismay.

Adam’s family, and Marcel was family, had come unglued when a car accident took Adam’s younger brother, Aaron, at the far-­too-­young age of ten. None of them had ever completely gotten over it.

“You going to have to get in? It’s cold.” Marcel handed Adam his coat.

“Be careful, sir.” Marcel opened the door, and Adam broke into a jog. “Thanks, Marcel. Hold the fort.”

have gotten him on Grandmother’s bad list, if he hadn’t already been there.

It took fifteen minutes to reach the double bridges. The bridges had a formal name—­after a local politician from the thirties—­but no one used it.

He slowed as he approached the roadblock, then pulled in behind fellow dive team member and homicide investigator Gabe Chavez. Gabe climbed out first and met him at the door, giving a low whistle as he looked the Audi over. “When you gonna let me drive this baby?”

This was why he tried not to drive his personal vehicle to crime scenes, but sometimes he didn’t have a choice. Grandmother had given him the car for his college graduation—­even though he had told her he didn’t need it—­and she didn’t approve of him arriving for Sunday lunch in the unmarked sedan he drove for work.

He held the keys out to Gabe. “Any time.”

Gabe eyed the keys, longing evident on his face. “One of these days I’m going to take you up on it.”

Adam pulled his bag out of the back, locked the car, and pocketed the keys. He glanced at the line of cars on the side of the road. “Who else is here?”

“Ryan is hiking in the mountains with Leigh,” Gabe said. Homicide investigator Ryan Parker was the second-­in-­command on the dive team. His girlfriend, Leigh Weston, had survived an attack by a serial killer last spring.

Gabe grinned. “I guess we’ll find out when they get back. He got the text about this, but Anissa told him to disregard it.”

“You’ve talked to Anissa?” Gabe and Anissa hadn’t gotten along well since she’d kicked him off the dive team a few years ago when his undercover work had repeatedly kept him from making it to training dives. But since he’d come back to Homicide, and since two of their divers had left the team—­one for medical reasons and

another for retirement—­she’d been encouraged to allow him back. Their relationship remained strained, but since the serial-­killer case involving Leigh last spring, the tension between them had eased.

CLICK TO CONTINUE READING CHAPTER ONE, TO BE FEATURED ON 11/14/18 WITH LONE STAR BOOK BLOG TOURS WITH BOOK FIDELITY BLOG.

Lynn H. Blackburn is the author of Hidden Legacy (Love Inspired, June 2017) and Covert Justice, winner of the 2016 Selah Award for Mystery and Suspense and the 2016 Carol Award for Short Novel. Blackburn believes in the power of stories, especially those that remind us that true love exists, a gift from the Truest Love. She’s passionate about CrossFit, coffee, and chocolate (don’t make her choose) and experimenting with recipes that feed both body and soul. She lives in Simpsonville, South Carolina, with her true love, Brian, and their three children.
║Website║ Facebook║Instagram║
║ Pinterest ║ Twitter║
║ Goodreads║————————————-
GIVEAWAY!  GIVEAWAY!  GIVEAWAY!
Grand Prize: Print Copies of Both Books in the Dive Team Investigations Series
+ Hydro Flask, Candle, & Bath Bombs
2nd Prize: Print Copies of the Series + $25 B&N Gift Card;
3rd Prize: Print Copies of the Series + $10 Starbucks Gift Card
NOVEMBER 6-15, 2018
(US ONLY) 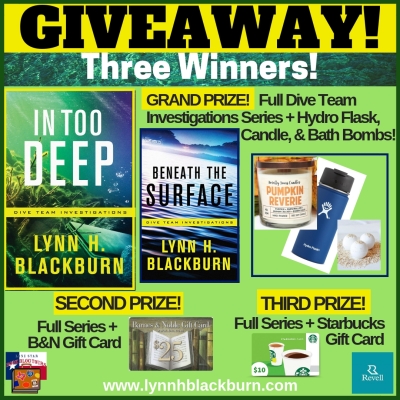