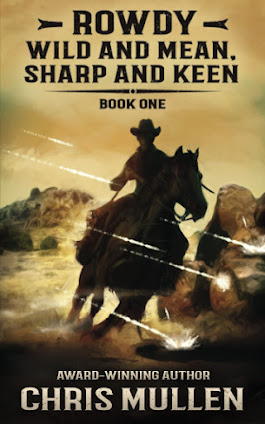 Thrust to the mercy of the Mississippi river, thirteen-year-old Rowdy floats safely away as he watches the smoke rise from his burning farmhouse. Now alone in the world, his perilous journey of survival begins, challenging and shaping him into the young man his father would want him to become.

Pulled from the waters, he is given a chance by a lone river Captain and his mate. Rowdy has grown strong working the river but must use his wit as well as his strength to confront a bullying crewman and survive a surprise attack by river pirates.

Growing up on the Mississippi River was a start for Rowdy, but Dodge City, Kansas proves it has its own challenges. He was warned not to get entangled with Patrick Byrne Byrne, Dodge City’s most powerful rancher. Unknowingly crossing Byrne, he faces life and death decisions. Rowdy’s only option is to run.

Survival is what he has come to know all too well. His escape across the plains nearly claims his life. Through a stranger’s help, Rowdy recovers and finally discovers Lincoln, New Mexico, and acquires a new friend along the way. Rowdy is settling in when hired guns sent by Patrick Byrne find and confront him. Blood, bullets, and tears bring Rowdy’s world to a showdown. Fighting for what was right is his code, living life for others becomes his way, and staring danger in the face is what he must do if he can truly be Wild and Mean, Sharp and Keen.

THE HUNT: A ROWDY SHORT STORY

Is it still a hunt when YOU are the hunted?

In this Rowdy short story, Rowdy and Roberson make it to the mountains and find more lurking in the woods than they bargained for.

Towering snow-capped peaks disappeared into a thin film of clouds that gripped the top of the mountain range like fingers of a ghostly giant clutching rock and timber as it pulled itself in slow ascent. Crisp morning air showed itself, then disappeared with each expelled breath from the horses as Roberson and I followed the long, winding trail that snaked its way up the gradually rising slope. Large boulders lay scattered like tossed jacks over green meadows that carved out spaces of solitude among the tall pines and fir trees on the climbing landscape. Delilah’s ears twitched as a parcel of deer emerged from the cover of trees and darted across the open meadow in front of us not two-hundred yards away. Their grace and speed brought a smile to my face while Roberson spat and reached for his rifle.

“Hold up there,” I said. “No use in rushin’ the hunt. We’ll be at camp soon and then we can start a proper track.”

Roberson pulled the rifle to his shoulder, aimed, then reluctantly conceded this round to the deer. He spat again and shook his head. He returned his rifle to its sheath and gripped the reins tightly. An exasperated look twisted across his face.

“Come on. There’ll be plenty more just like ‘em.”

Our trip had been delayed long enough in his mind. Now that the storms had passed and the Circle ‘R’ was a two-day ride in the rears, we were closing in on a much needed get-a-away.

We continued in silence, crossing the trodden path the deer had left. Deep hoof marks dug into the earth leaving a trail even a greenhorn could follow. I looked to where they had come from and wondered why they moved so quickly from cover.

“What’s got them so riled up?” Roberson said.

Scan the QR code or click to get a free eBook copy of The Hunt, a Rowdy Short Story! (Registration for Wise Wolf Books’ email newsletter is required, but you are free to unsubscribe at any time.) 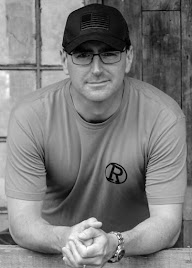 Chris Mullen is an author from Richmond, Texas. He graduated from Texas A&M University in 1997 and began his teaching career. Chris was awarded the 2019 Connie Wootton Excellence in Teaching Award presented by the Southwest Association of Episcopal Schools. In 2021, Chris signed with Wise Wolf Books, a YA Imprint of Wolf Pack Publishing, and re-released his debut novel ROWDY: Wild and Mean, Sharp and Keen on February 24, 2022. On March 31, 2022, he released ROWDY: Redemption, followed by an April 21, 2022 release of ROWDY: Dead or Alive. Chris currently writes for Wise Wolf Books and is working on the next ROWDY installment.
His novel, ROWDY: Wild and Mean, Sharp and Keen was named WINNER in the 2020 American Fiction Awards, a 2020 Best Book Finalist, and 3rd Place WINNER in the 2021 Selah Awards, all in the western category. His YA Western series, ROWDY, continues to grow and attract readers of all ages.
Website Facebook Instagram
Twitter TikTok Amazon Author Page
GIVEAWAY!
ONE WINNER:
Autographed set of the Rowdy Books
+ Rowdy Tee Shirt! 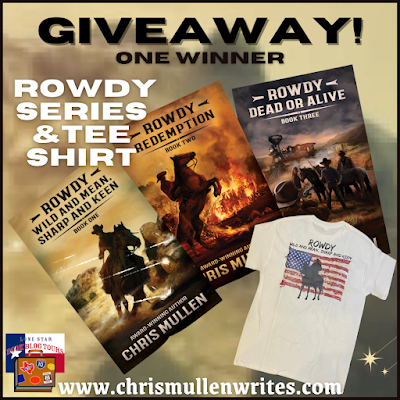