Scroll Down for Giveaway

Set in a small coal-mining town, Whisper Hollow is full of secrets, love, and betrayal, where Catholicism casts a long shadow and three courageous women make choices that will challenge our own moral convictions.

One morning in Verra, a town nestled into the hillsides of West Virginia, the young Myrthen Bergmann is playing tug-of-war with her twin, when her sister is killed. Unable to accept her own guilt, Myrthen excludes herself from all forms of friendship and affection and begins a twisted, haunted life dedicated to God. Meanwhile, her neighbor Alta Krol longs to be an artist even as her days are taken up caring for her widowed father and siblings. Everything changes when Myrthen marries the man Alta loves. Fourteen years later, we meet Lidia, a teenage girl in the same town, and her precocious son, Gabriel. When Gabriel starts telling eerily prescient stories that hint at Verra’s long-buried secrets, it’s not long before the townspeople begin to suspect that the boy harbors evil spirits—an irresistible state of affairs for Myrthen and her obsession with salvation. Rendered in exquisite prose, Whisper Hollow is an extended reflection on guilt, redemption and the affirmation of life in this early 20th century Appalachian community.

“Cander divinely delves into multiple points of view, crafting a collage of vibrant, layered characters while charting six decades of poignant, precise moments. A distinctive novel that sublimely measures the distressed though determined heartbeat of a small mountain community.”

“Cander weaves together the stories of these varied characters across nearly five decades with skill and grace, and in her hands, Whisper Hollow grows into much more than the sum of its many parts. The result is a memorable novel about the bonds of town and family, the strength of friendships in unlikely places and the power of secrets to shape a life–or many lives–often without anyone even recognizing it.”

“Cander superbly envisions the town, its residents’ dynamics, and the early twentieth-century immigrant experience…[and] rewards the reader with…well-developed, believable characters whose mental fortitude and capacity to love linger in the reader’s mind long after the last page.”

“[Whisper Hollow] is inextricably rooted in West Virginia coal country—the rough locale that determines and intertwines [Cander’s] characters’ fates…Cander closely tracks how Myrthen’s and Alta’s romantic decisions unknowingly complicate each other’s lives in the lead-up to a tragic incident that bisects the novel…[and] admirably captures the lack of choice that men and women have in rural West Virginia.”

“Spare, elegant writing by the author of 11 Stories evokes a bleak atmosphere and creates a smooth, compelling narrative… much of the prose is so outstanding, this writer is clearly gifted.  Give this literary, plot-driven novel to those who enjoy the West Virginia setting and who like a gentle handling of their tragedies.”

What did you enjoy most about writing this book?

My mother’s side of the family is from West Virginia, and we visited them frequently when I was growing up. I love Texas, but there was something magical about the natural beauty of West Virginia: the colors, the mountains, the creek that ran behind my grandmother’s house. Those memories wove themselves into my imagination, and so when I had the idea to write about a coal mining community, setting it in my mother’s home state gave me the opportunity to explore that magic again.

What was it that drew you to the three female characters and made you want to write about them?

Each of these women is burdened and informed by her secrets: Myrthen, because of something she did, Alta, because of something she desired, and Lidia, because of something that happened. Those secrets dictate the courses of their lives, which intertwine at various points, affording them the opportunity to help or hurt one another, which each of them did, according to her own needs. What drew me to these characters was their varying tolerance for truth, and the lengths they would go to hide their private shames. By writing about them, I was able to examine those unexposed parts of myself.

Just as your books inspire authors, what authors have inspired you to write?

The “Writer Waiting” in Shel Silverstein’s eponymous poem in his collection Falling Up: “Oh this shiny new computer— There just isn’t nothin’ cuter /… / It can edit and select, / It can copy and correct, / So I’ll have a whole book written by tonight / (Just as soon as it can think of what to write).”

What did you find most useful in learning to write? What was least useful or most destructive?

Letting myself wander on the page. I tried plotting once, and it was the emotional equivalent of solitary confinement. There was no freedom in it, no joy. For me, creative writing is an act of spontaneous exploration, like an unplanned road trip. There’s a character or characters, and a starting place, and off we go. At some magical point, we do a Chinese fire drill and all switch places, and I become a passenger instead of the driver. Also, it’s a haptic experience: I have to touch my fingers to the keys for the ideas to flow. I’ve always thought that were I to lose the use of my hands, I couldn’t tell stories, because it doesn’t work unless I’m physically writing. (That’s one of the reasons, by the way, that Roscoe lost his finger in 11 STORIES. I was imagining my own loss of creative expression.)

What do you like to read in your free time?

This is a boring answer, but I read in my chosen genre. I’m inspired by those authors who write better than I do. It gives me something to work toward.

What projects are you working on at the present?

I’m writing a fourth draft of a novel called The Weight of a Piano, which explores the burdens of provenance and the meaning of home. The present tense narrative is set in Death Valley National Park, and the past tense narrative takes place in Germany, Moscow, and Los Angeles. It’s about a woman named Clara Lundy, whose father gave her an antique Blüthner piano for her twelfth birthday and only days before her parents’ accidental deaths, and of Russian-born pianist Katya Zeldin, who, decades earlier, inherited that same Blüthner as a child. The story is structured like a piano’s keyboard, the past and present represented as white and black keys, moving the story chromatically through the characters’ interwoven histories. This is an adult coming-of-age story: as Clara discovers the circumstances behind her father’s gift, she realizes that the piano she’s been dragging through her life isn’t what she imagined it to be, and that finding a way to let go of the past might be the only way to let herself go forward.

If you had a superpower, what would it be?

I have it (and so do a lot of other people)—the power to write. I wouldn’t trade that for all the invisibility in the world. 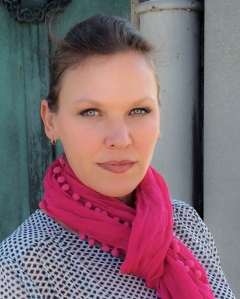 Chris Cander is a novelist, children’s book author, screenplay writer, and writer-in-residence for Houston-based Writers in the Schools. Her novel Whisper Hollow was selected as an Indie Next pick and nominated for the 2015 Kirkus Prize in fiction and her award-winning novel 11 Stories was included in Kirkus’s best indie general fiction of 2013. Her children’s book The Word Burglar received the silver 2014 Moonbeam Children’s Book Awards for Reading Skills & Literacy. Her animated feature film Germs! is currently in pre-production with Cinsesite in partnership with Comic Animations. Chris well knows that the pen is mightier than the sword, but she’s willing to wield one of those, too. A former fitness competitor and model, she currently holds a 3rd dan in taekwondo and is a certified ICSU Women’s Defensive Tactics Instructor. She is a member of the American Society of Journalists and Authors, Society of Children’s Book Writers and Illustrators, the Author’s Guild, the Writers’ League of Texas, PEN, and MENSA. 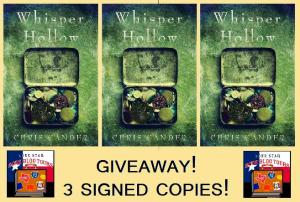