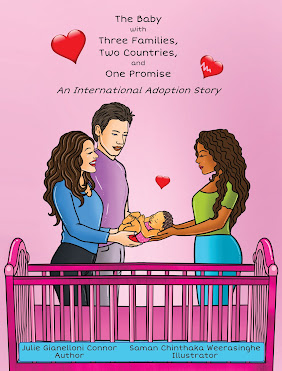 The Baby with Three Families, Two Countries, and One Promise is a children’s book designed to be read by parents to a child adopted from a foreign country. The story is first recounted from the perspective of the parents in the USA, who are very sad not to be able to have a child. The perspective then switches to that of the biological mother, who realizes that she does not have the wherewithal to raise a child. She makes the difficult decision to give up her baby. Next readers learn about a foreign adoption agency, to which the biological mother surrenders her child. The adoption agency identifies foster parents to take care of the baby temporarily. The foster parents give the baby a temporary name.
The parents in the USA begin researching international adoption possibilities and connect with the foreign adoption agency. The parents begin the adoption process and have to go to a school to learn how to be adoptive parents. When the foreign adoption agency matches the USA parents with the baby, the USA parents fly to the foreign country, where they meet the baby and the foster parents at the adoption agency. They find out that the temporary name given to the baby by his foster parents is one of the names they have selected for the baby. Their last requirement in the foreign country is to secure a visa for the baby from the U.S. Embassy.
With the baby’s visa in hand, the parents and baby return to the United States, where they are joyously greeted by their dog, their friends, and the baby’s new grandparents. When the parents tuck their baby in at night, they tell him his story—that he has three families, two countries, and a promise for the future to visit the country of his birth when he is older.
PRAISE FOR THE BOOK
Children’s Picture Book First Place Winner, 2021 North Texas Book Festival Awards
“Clearly laying out some of the key reasons, factors, and steps in the emotionally complex process of overseas adoption, this book delicately explores the subject, making it a great launching point for conversations between parents and children.” Self-Publishing Review
“International adoption is a complex topic, but under the dual, in-depth focus of author Julie Gianelloni Connor and illustrator Saman Chinthaka Weerasinghe, the story comes to life to teach all ages about the emotional and organizational process involved in joining a child to new parents.” Donovan’s Literary Services
CLICK TO PURCHASE!
│ Amazon│ Bayou City Press│

Author Julie Connor talks about The Baby with Three Families, Two Countries, and One Promise’s illustrator, Saman Chinthaka Weerasinghe, and about working with a long-distance illustrator. 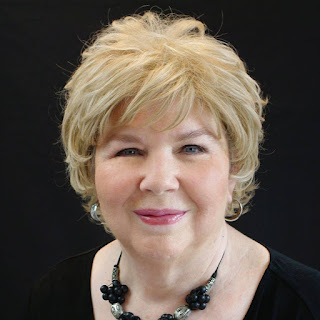 Julie Gianelloni Connor is an award-winning author and retired senior Foreign Service Officer. Her first book, Savoring the Camino de Santiago: It’s the Pilgrimage, not the Hike, garnered no. 1 status on Amazon in both the category for new books on hiking and walking and the category for Spain and Portugal. It subsequently went on to win a silver medal in the eLit national competition as well as being selected as a finalist by Self-Publishing Review (SPR). She released her second title, a children’s book, in 2021. It has just won first place in the children’s book category at the North Texas Book Festival. The Baby with Three Families, Two Countries, and One Promise tells an international adoption story. Her short stories have appeared in four anthologies.
Julie is the owner and publisher of Bayou City Press (BCP) in Houston, Texas, which focuses on travel writing, Houston, history, and international affairs. Julie writes a weekly newsletter for BCP updating subscribers about activities. She founded BCP after spending 33 years as a diplomat in the U.S. Foreign Service, first with the U.S. Information Agency and later with the U.S. Department of State. She had nine overseas assignments in seven different countries: Israel (twice), Paraguay, Guatemala, Indonesia, Colombia (twice), Malaysia, and Chile. In Washington, DC, Julie worked on a variety of matters, ranging from nuclear non-proliferation to narcotics control to women’s issues. She has one son and two cats, Halloween and Charles Augustus V.
◆  WEBSITE  ◆  FACEBOOK  ◆  TWITTER ◆ AMAZON ◆
◆  GOODREADS  ◆ INSTAGRAM ◆  LINKEDIN  ◆ 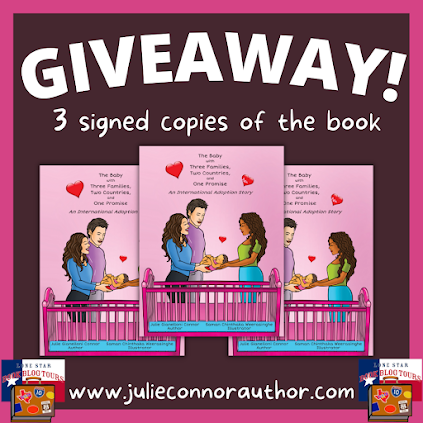 a Rafflecopter giveaway
CLICK TO VISIT THE LONE STAR LITERARY LIFE TOUR PAGE
FOR DIRECT LINKS TO EACH POST ON THIS TOUR, UPDATED DAILY,
or visit the blogs directly: 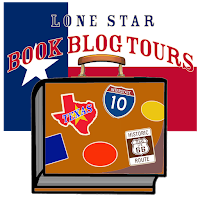 2 replies to The Baby with Three Families – Author Video