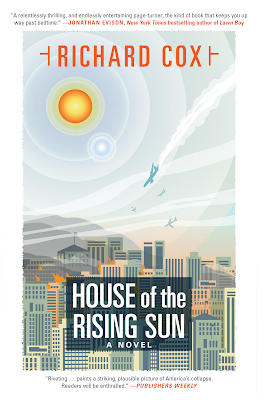 Both a frightening apocalyptic story set in the southern United States and a character-focused, deeply moving literary thriller.

What would happen if technology all over the world suddenly stopped working?

When a strange new star appears in the sky, human life instantly grinds to a halt. Across the world, anything and everything electronic stops working completely.

At first, the event seems like a bizarre miracle to Seth Black–it interrupts his suicide attempt and erases gambling debt that threatened to destroy his family. But when Seth and his wife, Natalie, realize the electricity isn’t coming back on, that their food supplies won’t last, they begin to wonder how they and their two sons will survive.

Meanwhile, screenwriter Thomas Phillips–an old friend of Natalie’s–has just picked up Skylar Stover, star of his new movie, at the airport when his phone goes dead and planes begin to fall from the sky.

Thomas has just completed a script about a similar electromagnetic event that ended the world. Now, he’s one of the few who recognizes what’s happening and where it will lead.

When Thomas and Skylar decide to rescue Natalie and Seth, the unwilling group must attempt to survive together as the world falls apart. They try to hide in Thomas’s home and avoid desperate neighbors, but fear they’ll soon be roaming the streets with starving refugees and angry vigilantes intent on forming new governments. It’s all they can do to hold on to each other and their humanity.

Yet all the while, unbeknownst to them, Aiden Christopher–a bitter and malignant man leveraging a crumbling society to live out his darkest, most amoral fantasies–is fighting to survive as well. And he’s on a collision course with Thomas, Skylar, and the Black family…

Highly Character-Driven Story About When the World Ends

House of the Rising Sun is the story you do not want to see come to pass moving forward into our futures. It is a terrifying story connected to the technology we have come to rely on in our everyday lives just outright failing.

This conglomerate character-driven, post-apocalyptic story by author Richard Cox is about learning to survive almost immediately when everything – cars, phones, computers, etc. – just stops. The characters are left without answers, only speculations.

This well-written story took me on a journey I hope never comes to pass during my lifetime when not only does everything stop working but humanity changes for the worse. Cox’s writing is so good that the shallowness and whiny women came through in all her whiny glory. While the story is about what happens after an electromagnetic pulse stops the technology, the characters carry the story in finding themselves in this new world. Hard decisions are what define the majority of the characters.

One more item this is a full-throttle story. Cox delivered it with at a fast pace and as hard as possible.  If you were reading it aloud – a reader could not catch their breath.

Yes – this is a character-driven story. My frustrations with the story come from: what the heck actually happened, is there any hope arriving from the government, and was this a worldwide event? I eventually realized that the author did not write this story about the event; he crafted the fiction around the characters and how each of them evolved into this new world that they were having to navigate.

House of the Rising Sun is not about zombies. It is actually scarier than zombies. It shows how technology has come to take so much prevalence in our lives. It reveals how a character can change for the better or the worse when their world changes. For readers who want to eschew zombie tales and experience a new take on the end of the world – then check out House of the Rising Sun.

Me – I’m going to start snail mail sending cards again and writing down addresses in a little leather book. Because you never know when that computer or phone will fail…